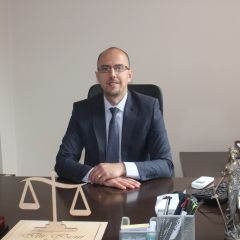 … Success is not final, failure is not fatal: it is the courage to continue that counts.

Certificates of training and participation:

During the work engagement of UKIM, at the Institute for Sociological and Political-Legal Research, she was involved in about forty projects supported by various domestic and foreign partners (see above). The studies that resulted from those researches, in which I also had a part in writing, included the systemic-legal dimension of the researched topics. Also, during the mandate as a judge in the Constitutional Court of the Republic of Macedonia, apart from the regular work, papers were also written which mainly stemmed from the experience gained from the jurisprudence of the Court. Author of seven books, about thirty studies or parts of studies (co-authorship) and twenty scientific papers. The following is a list of some notable and/or recent publications:

Description to other professional activities

Elected full professor and scientific advisor, Institute for Sociological and Political-Legal Research, “St. Cyril and Methodius” University – Skopje (2006-2008) on the subjects: “Civil Society-Characteristics and Legal Framework” and “Political Decision-Making”. Since 2018, the subject “Civil Society” has been taken over again. On March 31, 2006, she was re-elected to the teaching-scientific title of scientific adviser in the field of legal sciences (University Bulletin no. 894). Until 2008, she taught “Introduction to Politics” and “Contemporary Political Systems” in English and “Globalization and World Politics” and “Elections and Human Rights” in Macedonian at the University American College-Skopje, as well as “Civil Society – Legal Dimension” ” at the Institute for Sociological and Political-Legal Research. Permanent participation and/or management of research during the period of work at the Institute for Sociological and Political-Legal Research for various domestic and foreign partners: agencies of the United Nations, European Union, World Bank, OSCE, USAID, IRI, NDI, OSI, Foundation Friedrich Ebert, Konrad Adenauer Foundation, domestic civic organizations, partner universities, etc. I was involved in writing scientific papers, studies, analyses, reports, national strategies, strategic documents and academic lectures. The topics mainly related to: conflict management, elections, human rights (freedom of movement, peaceful assembly, gender equality, children’s rights, Roma, health, ethnic and religious affiliation, minorities, women’s rights, living environment), civil society, political system, peace, and stability. The following is a list of prepared strategic documents: